You are here: What to know1 / National Contribution

The national contribution of the people of Pyrga is engraved on the pages of the Greek and Cypriot history. The residents of Pyrga fought in the Balkan and World Wars and in the liberating fight of E.O.K.A. 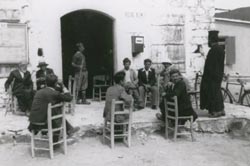 According to Papageorgiou, our fellow villager, the late Evaggelos Costanti Kasapis fought in both the Balkan Wars and WWI.

More fellow villagers fought in World War II. Following below is a table with the names of the people of Pyrga who fought and which have been mentioned by senior residents of the village to Kostas Papageorgiou:

The following residents of Pyrga fought in the liberating fight of EOKA against the British colonization:

Source:
Kostas Papageorgiou, Pyrga, Beneath the stare of Stavrovouni, Lefkosia 2007